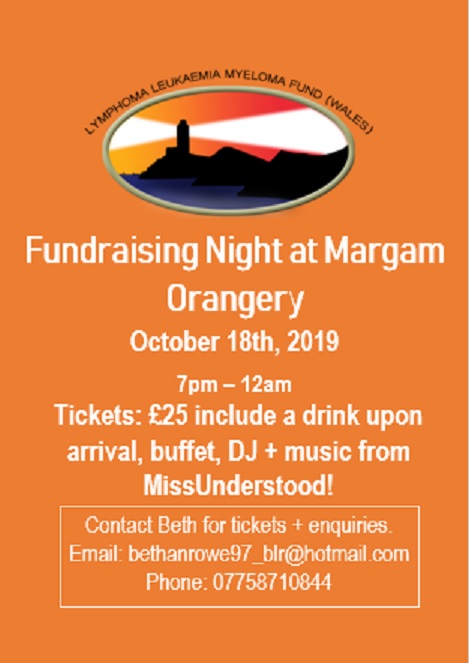 This evening fundraising event was organised by Bethan Rowe. A stunning venue and a lovely occasion and raised over £3,300 for  LLMF. Here follows, in Bethan’s own words why she decided to organise this special evening.

In October 2018, after receiving a completely unexpected Leukaemia diagnosis, my Dad became a long term, in-patient at Singleton Hospital. My Dad began treatment immediately, which of course comes with its own set of complications, resulting in him spending the majority of the next 6 months as a patient of Ward 12. The following months saw my Dad discharged from hospital, as he continued his treatment as an outpatient of Ward 11, which has led to him now being in full remission.

The treatment and support my Dad and our family received at Ward 12 & 11 has been incredible and as a way of saying thank you, we have decided to hold a charity fundraising event in aid of LLMF, a fantastic charity which supports both Wards at Singleton Hospital.

The charity night will be held on October 18th 2019, at Margam Orangery. Tickets are still available, and anyone interested in event tickets, or purchasing raffle tickets, can contact me on 0775871044, or bethanrowe97_blr@hotmail.com.