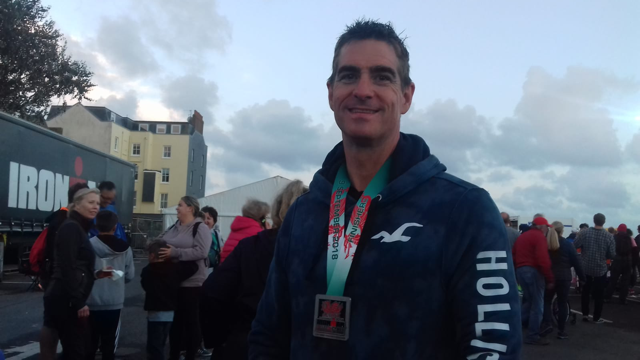 Long time supporter (and previous fundraiser) David Coates, had the crazy idea of taking on the challenge of doing Tenby Iron Man which was held in September.

Here, in David’s words are the reasons he took this on and why he wanted to raise lots of money for LLMF(Wales).  We send him huge congratulations for completing this challenge and for raising a fantastic amount of money too.

During my midlife Crisis, I decided to take on Ironman Wales as a target to get my endurance and strength fitness to the highest point achievable for me.

The Ironman is a triathlon race comprising of a 2.4 miles swim, 112 mile bike ride and a 26 mile run.  Ironman Wales is regarded as the second toughest in the Ironman global circuit, so I new I had my work cut out for me.

Both my parents (John & Marilyn Coates) have had blood cancer, both fought the cancer and are currently winning.  A fight thank God I have not had to take, but I am sure, without a doubt, an unbelievably hard fight for survival.

I have raised money for LLMF in the past when I did a 10 kilometre swim, and decided to raise money for LLMF again with my Ironman sponsorship.  I chose LLMF as my parents have benefited from the extra support and comfort that LLMF could provide for them, not just during their time in Singleton Hospital, but the years of after care.

I had trained as much as I could! Here is a summary of my “Race day”

4am rise and shine and head to transition.

When the sun started to rise it was time to make our way to the swim start.

2500 people standing on the beach ready to take the plunge into the day long challenge.

The National anthem starts, a humbling feeling comes over me as we sing in our masses.

The horn sounds, and we are off.  First lap of the swim, people are swimming over each other as the pack starts to stretch out.

I think to myself how lucky I am to be in good health and be able to take part in such an epic event.

The swim finishes for me after 1hr 2mins and the run back to transition starts.  The energy from the crowd, the screams of support was something I had never experienced before, truly epic!

The bike leg starts, and I am on the bike for 6hrs and 37mins.  Being mindful throughout the ride not to push too hard as a marathon awaits me at the end of it.

I had a great bike leg, and was feeling strong, again fuelled by the energy of the crowd.

Run shoes on and off I go to start the 26 mile hilly marathon.

When things started to get tough on the run, I just thought of  those people sat in hospital, fighting for their lives, and my situation then became a privileged one.

I was so pleased with everyone’s huge generosity and managing to raise so much money (final total TBC). I will let you know!

I will continue to race triathlon and  raise money for LLMF for my next big challenge.

I wake up each morning and give thanks that I am well and mindful of all those who are fighting today.  Cancer is one of those things, you know it is out there and it is happening, but it doesn’t hit home until your family or loved ones start their battle against it.

I am thankful for all the support that LLMF has provided for my parents and for the continued support they receive. 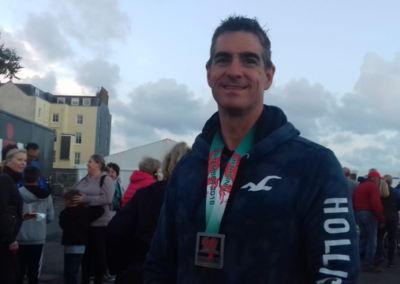 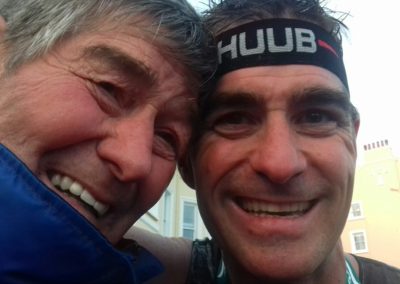